The origin and cause of the fire remain under investigation by the Sutton Fire Department, Sutton Police Department, and the State Police Fire & Explosion Investigation Unit assigned to the State Fire Marshal’s office. While emphasizing that no conclusions have been drawn at this time, officials are asking anyone with information on the fire to share it with investigators.

“Our goal right now is to gather as much information as possible.” “You can remain anonymous if you wish.”

The Arson Watch Reward Program provides rewards of up to $5,000 for information that helps to detect or prevent an arson fire. The confidential hotline can be reached by calling 1-800-682-9229.

The four-alarm fire was first reported at about 4:38 Sunday afternoon by motorists on Route 146. It consumed several acres of brush on both sides of that roadway and destroyed the drive-in’s screen tower. It grew to four alarms and drew mutual aid companies from Millbury, Grafton, Uxbridge, Douglas, Northbridge, Auburn, Mendon, Webster, Oxford, and the Department of Conservation & Recreation before being extinguished at 9:19 pm. The fire departments of Charlton and Leicester provided station coverage during the incident. 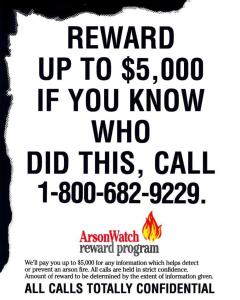 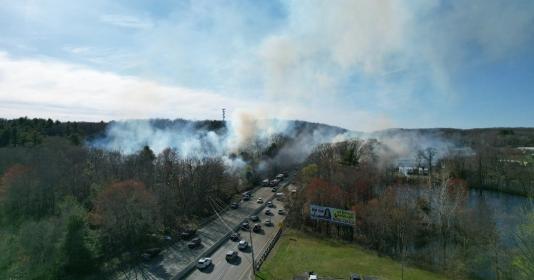